Home Around The Web When the Rohingya Came, This Christian Hospital Was Ready
0
SHARES
ShareTweet 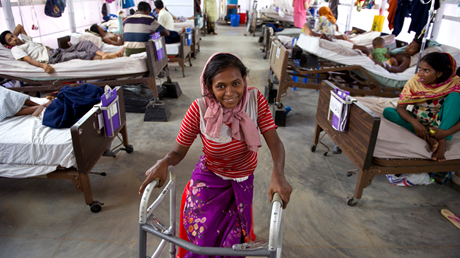 It wasn’t that Memorial Christian Hospital (MCH) in southeastern Bangladesh had no warning.

Steve Kelley, a surgeon at the Baptist facility, got a call from Doctors Without Borders (DWB) on a Friday afternoon last August.

“He was stammering,” Kelley said of the German physician on the line. The DWB (also known as Médecins Sans Frontières) aid facility was about 30 miles south of MCH, in a Rohingya refugee camp near the border of Myanmar.

“He described hundreds of dead and dying pouring across the border,” Kelley said. “It was a humanitarian nightmare. [DWB] was up to their eyeballs very quickly.”

The Rohingya, a Muslim minority living under almost constant persecution in Buddhist-majority Myanmar, lost their right to citizenship under national law in 1982—and with it, their access to health care, education, and police protection. Few have jobs, and many are banned from leaving their villages.

Their attack against Myanmar police involved handmade weapons. The Myanmar government was furious. In retaliation, soldiers spent weeks killing 6,700 Rohingya (including 730 children under five). They raped women and girls. They burned 288 villages. And along the nearby border with Bangladesh, where the refugees were fleeing, they laid landmines. (By some accounts, this “clearance operation” began before August 25.)