Billy Graham’s regrets, in his own words. 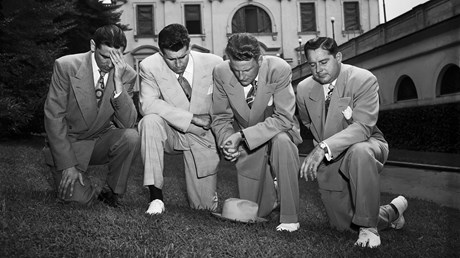 For all of Billy Graham's remarkable accomplishments, he made his share of mistakes. These mistakes might have harmed his ministry if not for Graham's willingness to confess them and learn from them.

“I've had to admit errors in judgment, and I've found Christian people more than generous in understanding my faults,” he told Christianity Today during the throes of Watergate in 1974. “It's better to show humility, and it's better to say ‘I'm wrong’ or ‘I'm sorry’ when you've made a mistake. … However, some of the criticism hurled at evangelical theology lands on me, and I suppose when I make a mistake it hurts the evangelical cause. I sometimes put my foot in my mouth. I've made many statements I wish I could recall. I am an erring, fallible disciple of our Lord Jesus Christ and am subject to all the temptations, human frailties, and errors of other disciples of the Lord.”

Kneeling on the White House Lawn

“When we arrived at the side gate of the White House, we passed through the security guards and checkpoints easily enough,” Graham remembered in the opening of his autobiography, Just As I Am. “The President's secretary then took us in hand, informing us that our visit would last exactly 20 minutes. Promptly at noon, we were ushered into the Oval Office. From the look on President Truman's face, the chief executive of our nation must have thought he was receiving a traveling vaudeville team.

“When we stepped outside the White House, reporters …