Columba Stewart says preserving Muslim texts is “part of the work of evangelism.” 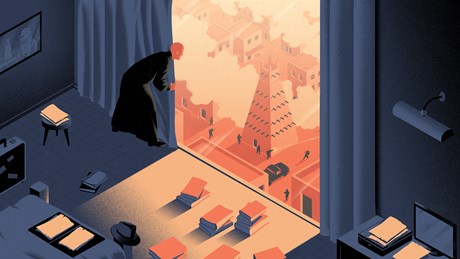 The shooting started right away. Columba Stewart had just touched down in Timbuktu when Islamist militants launched another attack.

The fighters were trying to retake control of Mali, after United Nations forces had pushed them back. As Stewart made his way through the ancient city in 2017, the rebels fired on security guards and the guards shot back.

Stewart was whisked to a safe room at the hotel. Waiting in the windowless interior room, he prayed. He sipped a little scotch. And he waited for hours. He knew what he had to do. Stewart is a monk—a Benedictine brother at St. John’s College, in Minnesota, part of the order that built libraries in the Middle Ages, preserving and reproducing Bibles by hand, along with psalters, books of martyrs, and Greek and Arabic philosophy.

So Stewart knew his responsibility in Timbuktu. He had to save the ancient manuscripts.

When the shooting stopped, Stewart spent the next two days training Malians to run a mobile digitization studio to preserve the more than 300,000 Islamic manuscripts that al-Qaeda might have destroyed.

“We don’t always know trouble is coming, but we have a history of being there just in time,” Stewart said. “People can say it’s serendipity, but I believe in providence.”

Stewart joined the Benedictines in 1981 and now serves at executive director of the Hill Museum and Manuscript Library (HMML) at Saint John’s. He has rescued documents in Lebanon, Syria, and Iraq, as well as Egypt, Ethiopia, and India—saving biblical texts and some of the most significant documents for the church in the Middle East, as well as Muslim texts.

Unlike manuscript hunters of the past, he leaves the treasure behind. He trains local leaders …