Jacob and Esau get all the attention. Yet it’s another pair of brothers who reveal the heart of the biblical story. 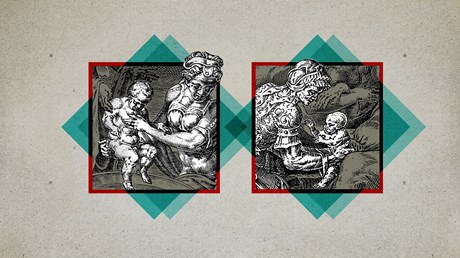 There are two pairs of twins in Genesis, but most of us only notice the first. Jacob and Esau get the headlines: the smooth wheeler-dealer who becomes the father of the Israelites and his hairy, oafish twin who gets tricked out of his birthright for a bowl of soup. By contrast, Perez and Zerah (Gen. 38) fly under the radar. They don’t appear in kids’ Bibles, or even sermons. Yet in many ways, they summarize the biblical story more crisply than any other siblings in Scripture.

The twins are born to Judah and Tamar, the product of an incestuous relationship between a father and his daughter-in-law, whom he thinks is a prostitute (another story omitted from kids’ Bibles). Judah will become the tribe of kings, so it matters greatly which twin gets the inheritance. During childbirth, one brother’s hand emerges first, and a scarlet thread is tied around his wrist to confirm that he is the heir. But when he withdraws his hand, his brother barges past and is born first. The line-jumper is named Perez, which means breach or breakthrough. The one with the scarlet cord is called Zerah, which means dawn or rising. In those two names is found the heart of the gospel.

The world looks for a Zerah. We want a king who rises up and shines like the dawn. We want the firstborn, with a mark of royalty on his fist. But God chooses Perez, the boy of the breach, the child of breakthrough. He wants the sort of king we never would choose: a younger, weaker boy, without the obvious signs of kingship, who only triumphs because God breaks through on his behalf.

This is the plotline of Genesis. Again and again, the “rising” that looks impressive loses out to the “breakthrough” that doesn’t. Human power …