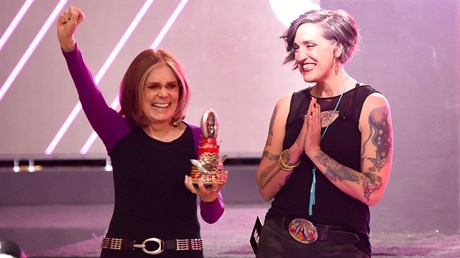 In case you haven’t heard, Nadia Bolz-Weber recently commissioned a statue of a vagina. She gifted the statue to Gloria Steinem, who I hope put it on her mantle (though in a pinch, it could also double as a paperweight or spoon rest). The sculpture exists in part to promote Bolz-Weber’s new book, Shameless, and in part as a kind of performance art protest against the damage done by “purity culture.” She invited women to mail in their purity rings—in exchange for a “certificate of impurity”—and then melted them down to form the statue.

Bolz-Weber’s statue has been applauded by some as an artistic celebration of female sexual liberation. Her critics, by contrast, bring up the authority of the Bible, the Christian call to repentance, and the need to distinguish destructive parts of “purity culture” from basic Christian sexual ethics like chastity and marital fidelity. Others take issue with the icon itself as a fertility idol (or at least a sex idol, since I’m assuming this statue is on the pill). A few less-helpful critics responded essentially, “Eww. Vagina art! Icky!”

However, long before Bolz-Weber’s book tour and the ensuing debate, Christians have been making yonic art. (Yonic, by the way, means vagina-shaped, or technically vulva-shaped. It’s the feminine counterpart to phallic.)
You want vaginal imagery? The church has you covered. Some early baptismal fonts (starting in about the 4th century) were quite intentionally yonic. The Baptistery of Jucundus in Subetula, Tunisia and Vitalis’ Baptistery (also in Tunisia) are two that look particularly vaginal, but there are a handful of others that art historians and theologians …