What companies might learn from the Old Testament practice of gleaning. 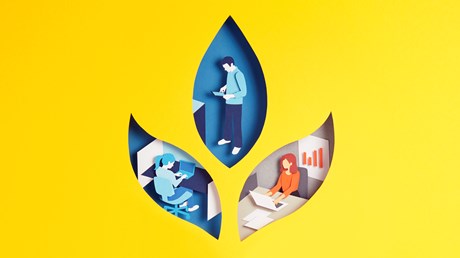 Gleaning, the Old Testament practice whereby farmers left an unharvested margin around their fields and the poor came and picked from it, was at the heart of the Book of Ruth. Was gleaning only an ancient agricultural regulation, Stumberg wondered, or did it also apply to how he should steward a modern-day tech business?

“I was contextualizing what Boaz did,” said Stumberg, who sees God as the ultimate owner of his business and its office space. “The story of Boaz helped me name something the Lord was moving in my heart.”

Stumberg’s growing company, TengoInternet, was in the process of enlarging its offices, and he had been wrestling with a question: How much space do you need? Even though he was not farming grain, Stumberg felt compelled to follow the example of Boaz and leave margin for others.

“It’s like hospitality,” he said. “When we expanded our space, we built a couple extra offices and deliberately set them aside for others to work.” Allies Against Slavery, a nonprofit startup working to stop human trafficking, moved into one office. An Anglican priest occupied the other. Stumberg did not charge rent or supervise them. He simply invited them in, and they set to work.

What Stumberg would eventually discover is a less-discussed side of gleaning. Scripture describes gleaners as the poor, widows, orphans, and foreigners (Lev. 19:9–10, Deut. 24:19–22)­—in other words, those society has relegated to a lower social status due to ethnicity, religion, gender, ability, or other economic disadvantage. At the most basic level, it was a practical way to help provide for those in need and to remind everyone of God’s own provision.