How the familiar benediction became a viral hit during the pandemic. 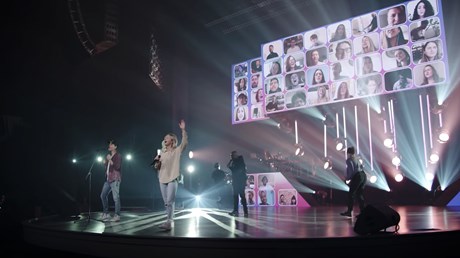 Just a couple of weeks before the coronavirus pandemic shut down the US, Kari Jobe held a songwriting session with her husband, Cody Carnes, and Elevation Worship’s Steven Furtick and Chris Brown. Together, they set to music one of the Bible’s best-known benedictions, Numbers 6:24–26:

When they introduced “The Blessing” at an Elevation Church campus near Charlotte, North Carolina, on March 1, Jobe told worshipers that the lyrics represent “the heart of the Father over us as his kids” and invited them to receive the song as “a blessing over you and your family and your children.”

They had no idea how many Christians would want to hear and sing out those words as the pandemic spread in the months to come. In just five months, “The Blessing” has become a chart-topping hit and viral sensation covered by more than 100 virtual choirs around the globe.

“Because this song is based on Scripture, the message is timeless, and we wanted to release it as quick as we could knowing the effect it could have on people ’s hearts and spirits immediately, as it did ours,” Jobe told The Christian Beat. “God knew it would be something we could hold onto during a season of our lives that ’s full of uncertainties and unknowns.”

The 12-minute video of the live performance at Elevation premiered on March 6 and has over 21 million views. One of those early viewers was Alan Hannah, assistant lead pastor at Allegheny Center Alliance Church in Pittsburgh, who helped organize the first virtual choir to …