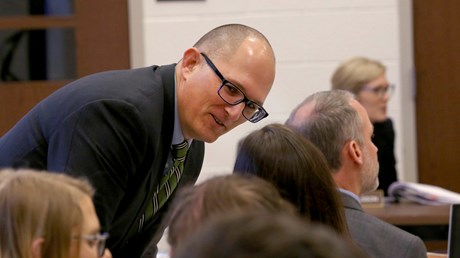 When Virginia public school teacher Peter Vlaming cited his Christian faith as the reason he declined to reference a transgender student with new pronouns, a school administrator replied that his “personal religious beliefs end at the school door,” according to a lawsuit filed last week.

Now a state court will decide whether that’s true as it adjudicates the dispute over Vlaming’s termination, and evangelical educators across the country—who face similar dilemmas in their own classrooms and hallways—will be watching for the outcome.

This case represents a growing legal clash between Christian teachers and policies around transgender students, who have recently fought for greater rights and recognition in schools. (Over the summer, a transgender teen in Vlaming’s home state won his case against a school bathroom policy that barred him from using restrooms that correspond with his new gender identity.)

“There was immense pressure to somehow go along [with school policy], but my conscience was clear,” he said in an email. “To just go along was to participate in something I knew was wrong. In moments like those you ask yourself, ‘Am I really going to live in accordance with what I know to be the truth?’ Not in my own strength. So, I asked God for the grace to carry whatever cross he gives me.”

Vlaming’s termination in December as a French teacher at West Point (Virginia) High School came after he agreed to call a transgender ninth-grader by a new male name but declined to use male pronouns to reference the student, according …