Preemptive Love’s Jeremy Courtney says despite the Turkey deal, “This crisis shows no sign of letting up, and we can’t either.” 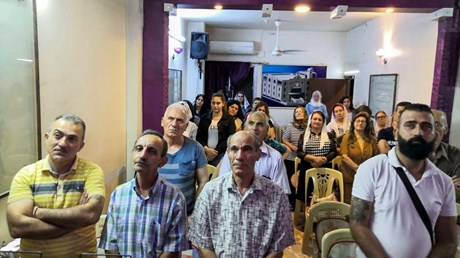 Though most of the fighting has stopped for now, Turkey’s incursion on Kurdish-controlled northern Syria has left another humanitarian crisis in its wake.

Local churches as well as Christian organizations like Open Doors and Preemptive Love Coalition have prioritized caring for the citizens who took the risk to stay behind and helping the displaced return.

Last Saturday night, after three days of Turkish bombing, the Alliance Church of Qamishli met to make a decision. Would they flee for safety, or remain and help?

To some degree they had no choice.

Fadi Habsouna, a father of two, was injured when missiles hit his home and ruined his shop. His wife is in critical condition. His grandfather’s home was destroyed by a bomb. The pastor housed them in church-owned property, and decided to remain to assist the family, and others suffering similarly.

The church agreed; only eight families would leave.

“These are extremely brave people who want to be salt and light in their communities,” said David Curry, CEO of Open Doors USA, who relayed this story from his field staff. “They want to maintain the presence of Jesus and reach out.”

Open Doors is better known for its advocacy work on behalf of the persecuted; Syria ranks no. 11 on its World Watch List of places hardest to be a Christian. Its local partners keep a low profile in order to provide on the ground assessment. But the crisis in Syria has driven them to humanitarian aid.

It is not the first time. Following the rise of ISIS in 2014, Open Doors helped 150,000 Christians located in camps along the Turkish and Lebanese borders. Now their community hubs are providing food, medical care, hygiene kits, and temporary shelter in the northeast Syrian towns …