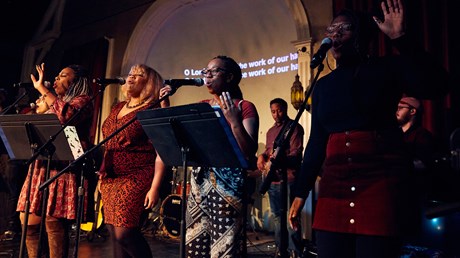 While many nonviolent protests and some destructive riots took place over the past week in reaction to George Floyd’s death, churches have responded in various ways—marching peacefully, holding prayer vigils, and addressing racial injustice from their pulpits. David Bailey, director of the reconciliation ministry Arrabon and founder of Urban Doxology, and David Taylor, associate professor of theology at Fuller Theological Seminary, believe there is another way churches can respond: in worship. But not just any kind of congregational singing. Bailey and Taylor dialogue about their passion for the biblical outlet for anger in singing the psalms.

David Taylor (DT): How do you feel about what has happened over the past couple of weeks?

David Bailey (DB): Former pastor and Native American activist Mark Charles says, “the temperature of race relations in America is always at a simmer and every so often there is an event that turns it to a boiling point.” As a black man living in America, so many decisions in my life are influenced by fear. When I jog, I go to a gym, so I don’t end up like Ahmaud Arbery. I never put myself in a position where it could be one white woman’s word against mine so that I don’t end up in a situation like Emmett Till or Amy Cooper in Central Park. This reality is often a private matter, but when racial disparity is in the news it causes a mixed feeling of vulnerability, relief that more people are aware, embarrassment that you don’t have as much control over your life as white Americans do, and anger that it is this way.

James Baldwin said that “to be a negro in this country and to be relatively conscious is to be in a rage almost all of the time.” …