Highlights from our archives. 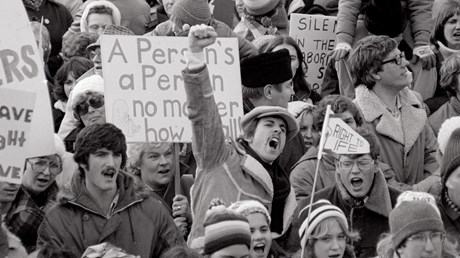 Since the 1973 Roe v. Wade decision legalizing abortion in the United States, Christianity Today has featured many articles arguing for the sanctity of human life and examining how Christians can respond. Here’s a selection of some of our key articles on this topic over the decades.

Norma McCorvey—known as “Roe” in Roe v. Wade—later came to faith in Christ and changed her views on abortion. This 1998 article details her conversion story.

“Ours is not the first abortion war,” Tim Stafford wrote in this 1989 CT cover story. In “The Abortion Wars: What Most Christians Don’t Know,” Stafford describes historical practices of abortion and infanticide and examines the Christian response.

Christian conviction about the sanctity of life is grounded in Scripture, yet the New Testament does not directly address abortion. In this 1993 article, Michael J. Gorman draws upon Jewish history and ancient texts to demonstrate that a “Jewish antiabortion consensus” was the norm in the first century and that “the earliest Christians shared the antiabortion position of their Jewish forebears.”

This 1999 article examines the prevailing sentiment that abortion is a necessary evil by debunking four myths about the purported need for legalized abortion.

That same year (1999), Frederica Matthewes-Green candidly addressed growing societal acceptance of legal abortion, asserting that while the “debate” may be over, “The pro-life …