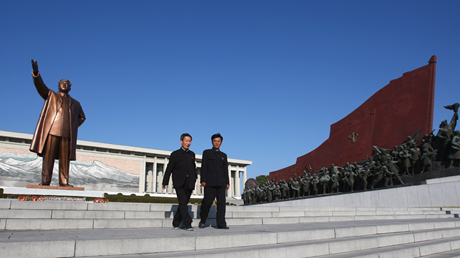 Dozens of diverse Christian leaders in the United States have come together to pray that possible diplomatic talks with North Korea will soon lead to peace on the Korean peninsula.

“We call on all Christians everywhere to join us in praying for a just and peaceful resolution,” wrote the group, which includes National Association of Evangelicals president Leith Anderson, Sojourners president Jim Wallis, author Eric Metaxas, and Evangelicals for Social Action executive director Nikki Toyama-Szeto.

“We pray for wisdom for our political, diplomatic and military leaders as they work across differences toward a goal of peace, security and freedom. We pray that God will bless the efforts of citizens who seek to bridge the vast differences between our countries.”

Their statement was released Tuesday, less than three weeks after President Donald Trump announced possible plans to meet with Kim Jong-un this spring. Johnnie Moore, one of the signatories and the unofficial head of Trump’s evangelical advisers, said the North Korea situation has often come up in their prayers at the White House.

The 90-plus initial signatories include several Korean Americans leading churches and ministries, such as activist Kathy Khang, pastor Eugene Cho, and North Park University professor Soong-Chan Rah. The group notes that a majority of the 2 million Korean Americans in the US are Christians, many of them evangelical.

In the statement, the leaders encouraged fellow believers to pray “with empathy and in a spirit of friendship” and emphasized that they “do not view the North Korean people as our enemies.”