Home Around The Web In Pandemic and in Health, I Make This Vow
0
SHARES
ShareTweet 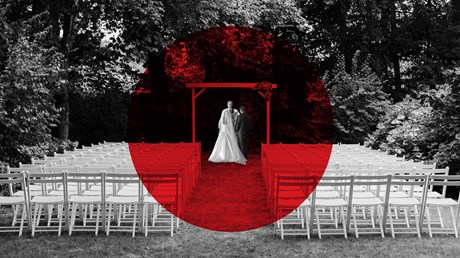 Sophia Lee thought she’d be heading to the altar next month. She had the dress, the rings, and two plane tickets for a honeymoon in Eastern Europe. Instead, she and her fiancé David Hermann are in a holding pattern. The couple is sheltering-in-place in Los Angeles, preparing to watch their April 25th wedding date come and go. Like fellow engaged couples the world over, their wedding plans have gone the way of the polite handshake: that is to say, up in smoke.

Back when the Centers for Disease Control first recommended people avoid gatherings of 10 or more, Lee and Hermann, both Christians, made the tough call to cancel their large wedding ceremony. Lee, a senior reporter for World magazine, had already known for a few weeks that her extended family from South Korea would probably be unable to make the trip. So she and Herrmann made the gut-wrenching decision to plan for a smaller wedding with just their local pastor.

They figured they’d have a small ceremony, forego their planned trip to eastern Europe, and opt for an Airbnb in Sequoia National Park, where they could honeymoon on a smaller scale and quietly grieve their best laid plans. But even that option now seems unlikely.

Situations like theirs are unfolding all over. Couples who had planned weddings from now even into the summer are grappling with a world totally unlike the one they knew when the engagement ring first sparkled in the light. Travel restrictions mean out-of-town guests are off the list. Large venues are closed. Some couples are postponing their wedding, while others are moving forward with small ceremonies. Some are even heading to the courtroom, if the courts are still open.

Whether to postpone or cancel a wedding is an especially tough …