The bizarre myths of “Jól” fail to offer the hope and joy of the true Christmas story. 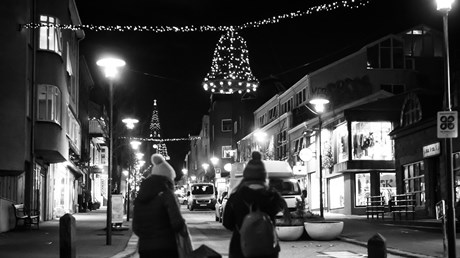 At this time of year, Christians turn to the prophecy from Isaiah: “For unto us a child is born …” (9:6), as we celebrate the Incarnation as a fulfillment of Scripture’s promises of hope and redemption.

Around Christmas in Reykjavík, Iceland, the sun rises at about noon and sets at about 3:30 p.m. As I take a midday walk in the dark, with Christmas lights on balconies and windows in my neighborhood illuminating the way, I think of the line from earlier in the chapter: “The people who walked in darkness have seen a great light; those who dwelt in a land of deep darkness, on them has light shone” (9:2, ESV). The metaphor is particularly striking for those of us who spend the winter in darkness.

Here, the Christmas holiday is called Jól, or Yule as some foreigners may recognize. There’s no fight over putting Christ back into Christmas, as even the word Jól has no connotation to Christianity at all. It can be traced back to at least pagan times, when it described the winter solstice festival; later, when Christianity came to the Nordic countries, it was used to refer to Christmas.

Few of our holiday songs recount the birth of Jesus. Instead, we sing about getting presents, holiday romance in the air, and characters in our own distinct traditions, which—as in a lot of Nordic countries—range from comical to bizarre. Besides a Santa Claus (with his familiar white beard and red suit), Iceland has the 13 Yule lads, brothers that live in the mountains and start heading into the city 13 days before Christmas, one by one.

These are mischievous pranksters, with names that coincide with their favorite ways of harassing the population: breaking into homes to steal …