Stan Guthrie pairs an edifying biography of an evangelical icon with the inside story of her international bestseller. 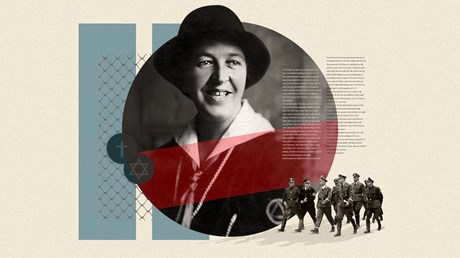 In the middle decades of the 20th century, a handful of popular books became something of an informal canon that helped shape postwar evangelical identity and piety. Think, for instance, of C. S. Lewis’s Mere Christianity, Billy Graham’s Peace with God, David Wilkerson’s The Cross and the Switchblade, John Stott’s Basic Christianity, Elisabeth Elliot’s Through Gates of Splendor and The Shadow of the Almighty, Hal Lindsey’s The Late, Great Planet Earth, Brother Andrew’s God’s Smuggler, or Charles Colson’s Born Again.

Among these near-canonical writings, Corrie ten Boom’s The Hiding Place, published in 1970, became a bona fide international phenomenon. The book sold millions of copies and was translated into numerous other languages. Then, in 1975, it was adapted into a film, which helped to further the reach of ten Boom’s story. As a result, ten Boom herself—by then in her 80s and still active in ministry—became a household name among evangelicals, remaining so until her death in 1983. Her book is still widely read today.

Stan Guthrie tells the story of this landmark evangelical book and the remarkable woman who wrote it in Victorious: Corrie ten Boom and The Hiding Place. Guthrie is a journalist, author, and former Christianity Today editor who has spent his career writing about evangelical faith and practice. In recounting the story of ten Boom and her famous book, Victorious itself is a fine example of another popular evangelical genre: the edifying biography that is meant to both inform readers and inspire them in their own spiritual walks.