(UPDATED) Orthodox leaders and UNESCO object to famous former church no longer being a museum. 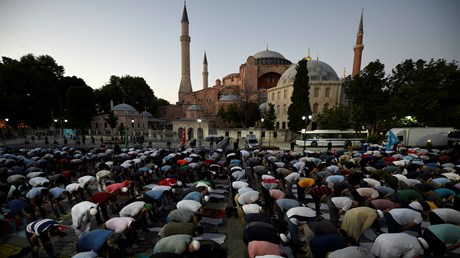 As Christians feared and many expected, the Hagia Sophia is now—again—a mosque.

The Turkish Council of State ruled today that the original 1934 decision to convert the sixth-century Byzantine basilica into a museum was illegal.

In a televised address to the nation, Erdogan said the first prayers inside the Hagia Sophia would be held on July 24, and he urged respect for the decision.

“I underline that we will open Hagia Sophia to worship as a mosque by preserving its character of humanity’s common cultural heritage,” he said, adding: “It is Turkey’s sovereign right to decide for which purpose Hagia Sophia will be used.”

Istanbul-based Ecumenical Patriarch Bartholomew I, considered the spiritual leader of the world’s Orthodox Christians, warned in late June that the building’s conversion into a mosque “will turn millions of Christians across the world against Islam.”

And UNESCO reminded Turkey of its international obligations, as the Hagia Sophia is registered as a World Heritage site.