Home Around The Web Grieving Our Broken Border
0
SHARES
ShareTweet 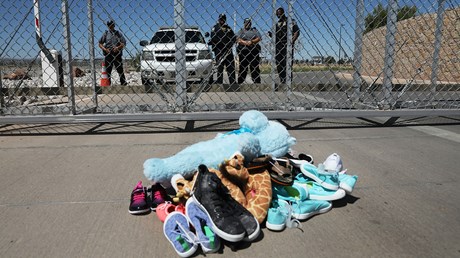 As CT’s immigrant communities editor, I was planning our coverage of the crises affecting immigrant children at the Texas border when I saw the now-infamous Associated Press photo: that little arm around the neck of her father, hanging on as they drowned in the Rio Grande.

She could have been one of the diaper-less toddlers in a detention center. One of the 700 separated from her parents in the last year. One of 125 to be left behind after the parents were deported. She could have been one of the 1,000 or more children abused while in US shelters. Meanwhile, authorities continue to discover unidentified border-crossers dead in the South Texas desert—most recently, a young woman, toddler, and two infants found in Mission, Texas.

As I continue to report on Christians at the border—the humanitarian work ministries are doing there as well as efforts to lobby Congress for a better system—I realized we must begin with lament over the hopelessness and danger these image-bearers face.

Lament is a cry for mercy or help in a time of sadness and regret. Because we are uncomfortable in lament, we often look away in times of overwhelming tragedy. We don’t want to feel grief over the deaths of migrant children: Carlos Gergorio Hernández Vásquez, 16; Juan de León Gutiérrez, 16; Darlyn Cristabel Cordova-Valle, 10; Felipe Alónzo-Gomez 8; Jakelin Call Maquin, 7; and Wilmer Josué Ramírez Vásquez, …