Beloved pastor and author nears completion of his long obedience in the same direction. 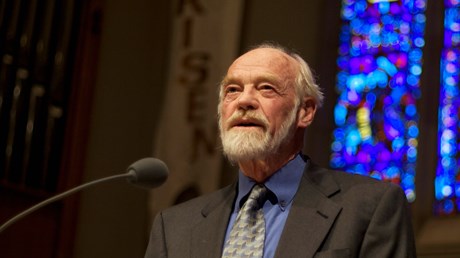 “Every moment in this man’s presence is sacred.”

So concluded the son of Eugene Peterson in a weekend announcement that the 85-year-old retired pastor and bestselling author of The Message and A Long Obedience in the Same Direction is receiving hospice care.

Robert Creech, a professor of Christian ministries at Baylor University’s Truett Seminary, shared the announcement from Eric Peterson on Facebook.

“Eugene Peterson has encouraged, formed, and often literally saved the ministry of more than one pastor over the years through his writing and thinking (I would include myself in that list),” wrote Creech in a Saturday post now shared more than 1,000 times. “He has refreshed Scripture for many through his thoughtful paraphrase of the Bible published as The Message.

“He has taught us to pray,” Creech continued. “It is time for those who have benefited from his ministry to return the favor to him and his family with prayer over the next several weeks.”

This past Tuesday, Peterson was hospitalized after “a sudden and dramatic turn in his health caused by an infection,” wrote his son on Friday to friends and family (with the encouragement that they share the news). “He is now being treated for pneumonia and is responding well to the IV antibiotics. He is eating again, and went for a very short walk this afternoon. He is much improved as of today.”

Elizabeth and I joined Jan and Leif in his room this afternoon for a meeting with his health care team of three doctors. They confirmed for us that the two main medical issues he is facing—heart failure and dementia—are advanced and progressing. Based on their recommendation, …