Founder of Christ for All Nations, the German Pentecostal held one of the biggest evangelism crusades in history. 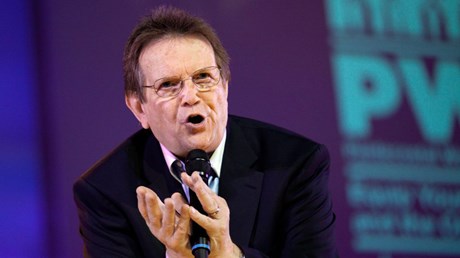 German evangelist Reinhard Bonnke, whose record-setting crusades led him to be nicknamed “the Billy Graham of Africa,” died Saturday at age 79.

His ministry, Christ for All Nations (CfaN), claims that more than 79 million people came to Christ as a result of Bonnke’s career, which spanned from 1967 until his retirement in 2017. The Pentecostal evangelist preached a prayerful message of Christ’s transforming power while also boasting miracles and healings.

“Those who knew him off-stage can testify to his personal integrity, genuine kindness, and overflowing love for the Lord,” said his successor, CfaN evangelist Daniel Kolenda. “His ministry was inspired and sustained by his rich prayer life, his deep understanding of the Word, and his unceasing intimacy with the Holy Spirit.”

Christianity Today reported from Bonnke’s largest in-person event, where 1.6 million gathered on a single night to hear him preach in Lagos, Nigeria. CT featured Bonnke and his ministry in an issue the following year, calling him “one of the continent’s most recognizable religious figures.” Historians have said that no Western evangelist spent as much time in sub-Saharan Africa as Bonnke.

Following his death, many African Christians offered their condolences on Twitter, saying “Rest well” and “Africa will never forget you.” The government of Nigeria stated that President Muhammadu Buhari, who is Muslim, “joins Christendom at large in mourning the passing of renowned evangelist, Reinhard Bonnke, 79, describing his transition as a great loss to Nigeria, Africa & entire world.”

Kenyan politician Esther Passari shared how “I spoke in tongues …