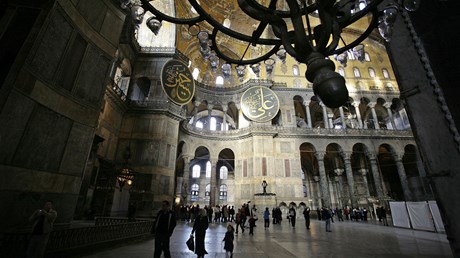 A Turkish court is scheduled to rule on July 2 if the iconic Byzantine basilica can be opened for Muslim worship.

Built in 537 by Emperor Justinian, in 1453 the Ottoman sultan Mehmet II converted the Hagia Sophia into a mosque. Five centuries later, the secularizing founder of modern Turkey, Kamal Ataturk, turned it into a museum.

UNESCO designated the Hagia Sophia as a World Heritage Site in 1985.

President Recep Erdo&gbreve;an has long stated his desire that the building would welcome prayer. In March, he led guests in silent Quranic recitation on the 567th anniversary of the conquest of Constantinople, dedicating the prayer to Mehmet II.

“I believe that believers’ praying suits better the spirit of the temple than curious tourists running around to take pictures,” tweeted Armenian Patriarch Sahak II, resident in Istanbul.

“The site is large enough to allocate a space for Christians, [so that] the world can applaud our religious peace and maturity.”

The Armenian Apostolic Orthodox Church represents the largest Christian community remaining in Turkey, with an estimated 90,000 members. The Hagia Sophia used to serve as the cathedral for the Greek Orthodox Church, whose members have dwindled to an estimated 2,500.

Ecumenical Patriarch Bartholomew I, also resident in Istanbul, expressed his concern over the possible conversion.

“Instead of uniting, a 1,500-year-old heritage is dividing us,” said the Greek patriarch, who leads 300 million Orthodox worldwide.

“I am saddened and shaken.”