Evangelical leaders describe the damage, how Christians are helping, and the need for a hope beyond politics. 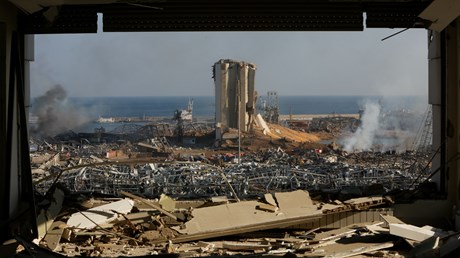 One hour later at work, and Sarah Chetti might have been one of thousands in a Beirut hospital.

Director of the INSAAF migrant worker ministry in Lebanon, Chetti’s colleagues described shards of broken glass flying through the air, and the metal frames of doors ripped from their hinges.

It was a similar experience for the one staff member inside the Youth for Christ youth center not far from the blast. To avoid the “colossal damage,” he ducked to the floor. Re-welding was necessary just to lock up the next day.

Peter Ford was fortunate. Working quietly in his faculty office at the Near East School of Theology near downtown Beirut, the first small reverberations stirred his curiosity to investigate the problem.

Moments later, the huge blast blew in his window and spewed the glass across his desk.

Miraculously, the dozen evangelical churches and ministries in Lebanon contacted by CT reported no deaths and few serious injuries caused by the massive explosion. The official national tally is now over 100 dead, with over 5,000 injured.

If they had, there would be nowhere for the bodies to go.

Habib Badr of the historic National Evangelical Church was forced to conduct the burial of two elderly members (whose deaths were unrelated to the explosion) as Beirut’s hospitals and morgues were all full.

Two Filipinos, however, were killed in the blast. And amid the ongoing economic suffering of Lebanon, several migrant domestic workers have been abandoned by families no longer able to pay for their services.

“They are distraught, worried, and scared,” said Chetti. “Problems are piling up one after the other. I’m reaching out to each one individually and praying for them, …